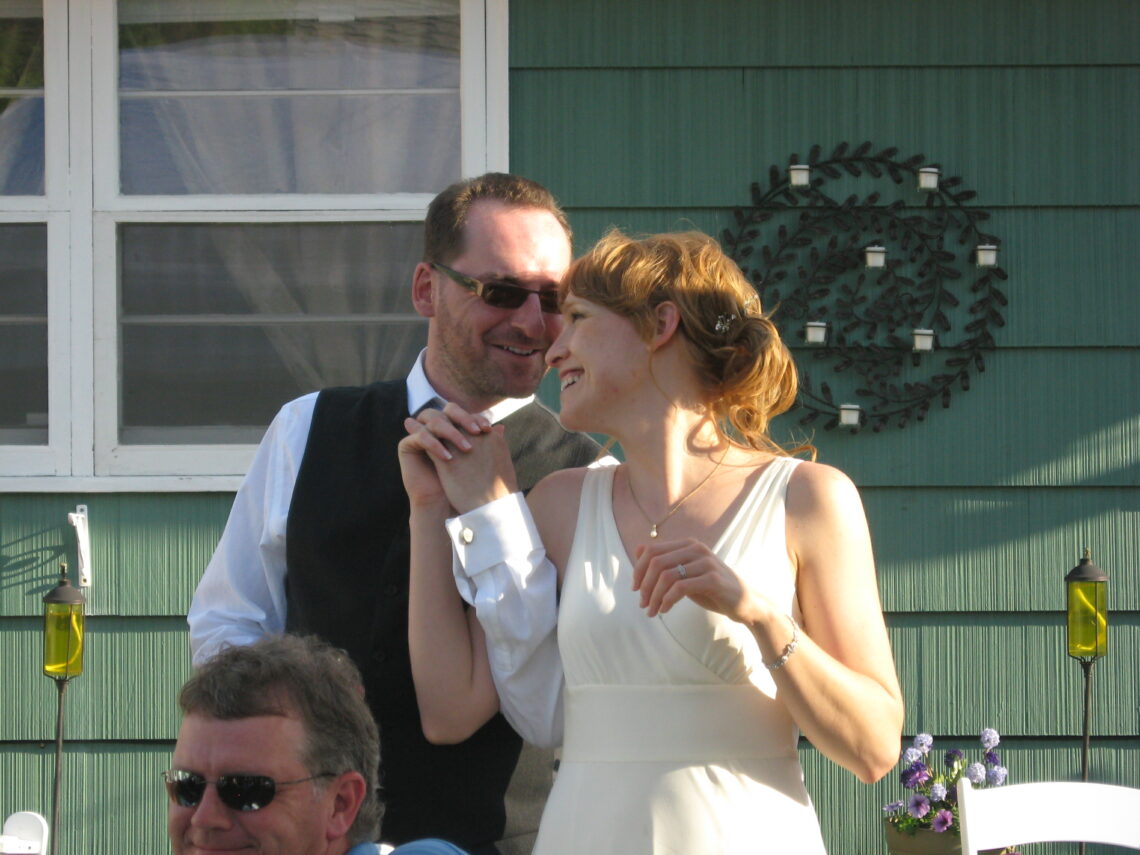 Thirteen years ago, at 10:30 in the morning, I walked down the aisle of the pretty, stained glassed chapel in my church and married Dr Andrew Mazz Marry in front of 13 members of our immediate family. It was a tiny wedding, partly modeled on Meg’s wedding from my beloved Little Women.

We kept things simple because I was simply ready to marry this man, to make our little family of three official after nearly seven years together, and I had no desire to be “on display.” Friends stepped in to carry out some of the necessities: Emily Williams-Wheeler hand stitched, painted and calligraphied our few, glorious wedding invitations. Mary Thrond put together my beautiful bouquet, which included white roses to honor my Scottish heritage and lilacs and lily of the valley from our garden because I adore them so. Terri Elofson Bly did my makeup. Tamara Weets took our beautiful photos. My mother and Quinn played a Bach violin and piano duet; in fact, all the music was Bach. My high school English teacher played the processional and recessional. We had a beautiful wedding brunch at the church and then opened up our back yard, which had been transformed by our dear friend Michael Walling, into a magical garden party for about 100 people.

I had no one stand up with me, although I did ask my dad to walk me down the aisle. We said vows to each other and had family vows that included Quinn. As a group we sang “Lord of the Dance” to remember Mazz’s dad who had died before I met Mazz. I loved every moment of it.

These many years later, I can look back on that day with nothing but absolute joy and satisfaction. The weather did its part and offered us a day of perfection from start to finish, when a few good friends and family stayed to sit around an outdoor fire pit long into the night.

I sometimes wonder if that young-ish version of myself would have made that short walk down that aisle if she could have glimpsed what she was bringing into her home, into her and her boy’s life. Would she have chosen the dark, insidious poison of addiction to filter through her little home, to permeate every aspect of her life?

There’s little question that there were bleak years and moments of utter despair, but on that beautiful morning, a day in temperament much like today, I had no such misgivings. The doors of the chapel opened, and my dad and I joyfully walked down that aisle to that man who was standing next to his best friend Nem, waiting for me and to officially begin our lives together.

And I can say, as I’ve often enough said on Daily Dose of Dr Marry & DD, I would absolutely not only walk down that aisle again, I would go through the crucible that was our lives for so many years again, to get to today and to the way I feel about Dr Marry, to get to the joyful marriage I have with a man who is so often my measured voice of reason, my rock, my biggest supporter and my true love.

On a Monday or Wednesday in mid-March, 2008, Dr Marry and I were walking our pup Lilly. He had recently found out he had been hired for a tenure-track position at MSUM, so we had a measure of stability that we’d never had before, since his positions had all been temporary, first as a post Doc and then as a fixed-term professor. I know exactly where we were on the walk when a feeling of absolute certainty spread over me, and I said, “You know, if you asked me to marry you again, I would have a different answer.” (The first proposal is a story for a different day.)

Funny, he never did ask me to marry him again. Somehow, we just came home from that walk and were engaged. It become official through Facebook when Dr Marry changed his status from “in a relationship” to “engaged.” I only found out about it when I showed up to my class the next morning, and a mutual student of ours, Malinga, asked me if I had anything to tell the class. I can still clearly see his beaming face as I looked at him with some confusion. He finally told me of the status update.

I promptly marched over to Dr Marry’s office on campus and asked him to take that down since no one in my family knew of our new change yet. Suddenly, his status when back to “in a relationship.” Dr Marry got some gentle ribbing from friends, all saying something to the effect of “I KNEW she’d never get married!”

But I did get married; we got married. And like every single marriage on the planet and throughout time, ours has had its ups and downs. But I meant it when I said, “For better, for worse. For richer, for poorer. In sickness and in health.” We’ve been tested, and I am quite certain we will be tested again, possibly many times. At the very least, one of us will likely have to learn to live without the other, as death takes us all in the end and rarely together.

But today, I am sitting in my sunroom, looking out over the pretty back yard, remembering that absolutely stunning day. More importantly, however, I’m reflecting back over these last 13 years and realizing that that day was the start of a truly joyful, blessed union, one that I would choose over and over again. One that I am lucky to have, and one that I try never to take for granted. When you skirt that close to the edge, you see, up close and personal, the fragility of relationships and how easily they can be shattered. With the benefit of time, you also see that the way you fill the cracks, the inevitable breaks, has the ability to strengthen the vessel and to provide a kind of unexpected beauty to the whole.

Here’s to many, many more years of strengthening our lives together, Dr Marry. 💗 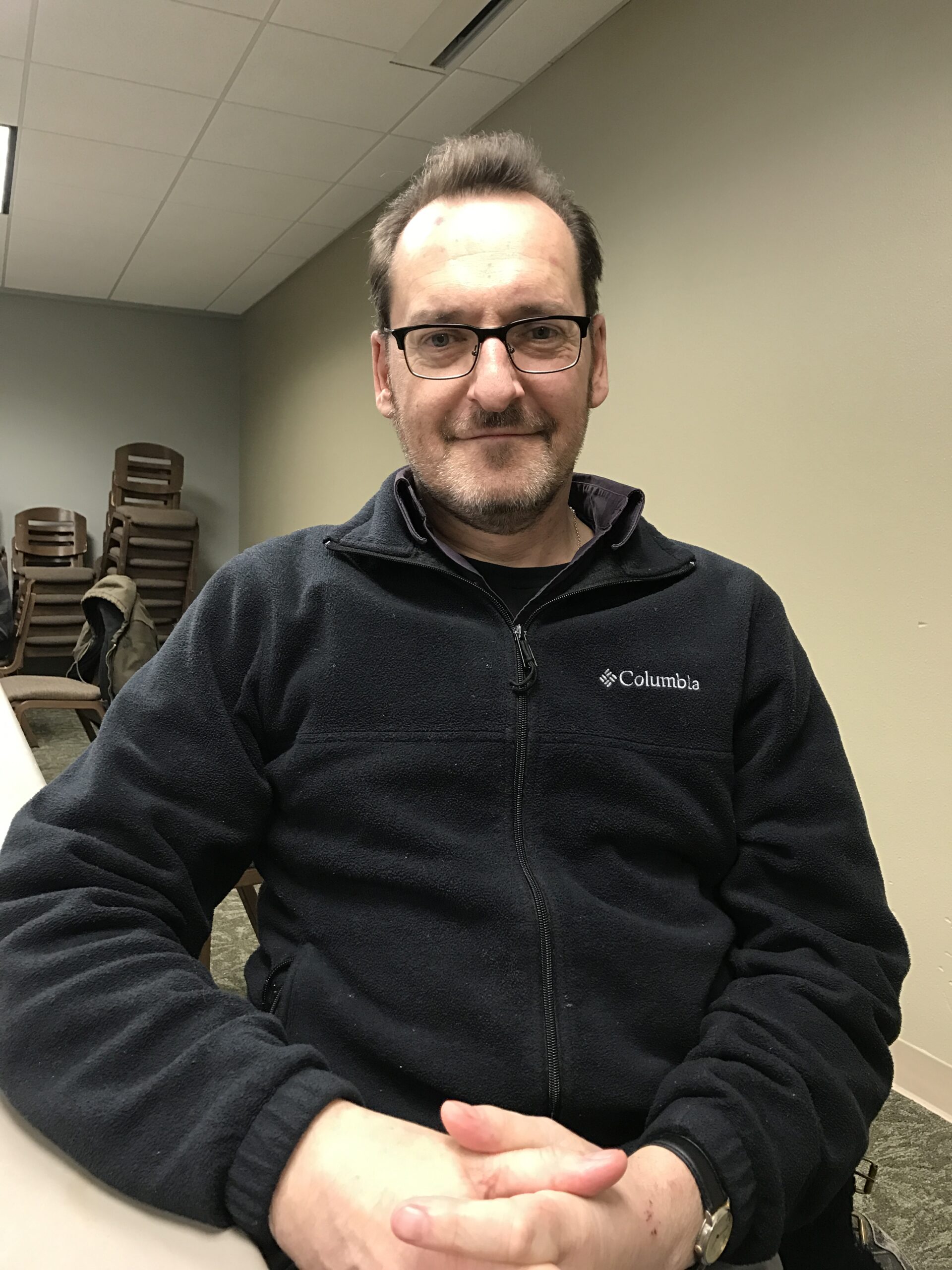 Two Voices of Hope: Progress (6a)