We moved you to Prairie St. John’s on your birthday (Feb. 16). Let me just say that I put in a terrible Valentine’s Day—I got the flu of the century, and you also decided not to go in to residential treatment but to do outpatient instead.

Never let it be said that you’re a pushover, sir!

I slept much of the day as much to get over the flu as to try to push the reality of your decision out of my consciousness. I just don’t want to do this again—ever—and I needed you to make the deepest commitment you could.

You did it. You agreed to residential rehab.

I was proud of you on your birthday. You checked yourself in to Prairie S John’s and were honest, at least as far as I know, about some things I have never heard you actually say before, and I’m sure that wasn’t easy.

Despite how sick I was and in spite of the mask they made me wear and the nap I took first in your hospital bed and then in the waiting room at Prairie because I still felt like garbage, I really loved that, and it gave me hope.

I believe you can stop drinking.

We are going to do this!

So, I haven’t written for a long time because I got lulled into thinking things were going well. Lulled in by you.

Because I forgot that you are a world-class liar. A shape-shifter of truth.

I feel foolish all over again because, again, I naively allowed you to manipulate me into believing you were making progress. But JoAnn says you are in deep denial about everything.

I’ve been thinking we should renew our vows in Hawaii. Now I feel so stupid for thinking that.

Tomorrow, I am speaking to your group therapy session, and you won’t know I’m coming until I get there. How will that go? What will you do?

This has been a tough 48 hours. I met with your group on Thursday. I still can’t really put into words what that experience was like. It was hard. I’ve never met seven better people in my life. I have also never met more broken people in my life. And you might be the most broken of them all. All your possibility, all your intelligence, all your gifts …

Actually, I think you’re lucky. You have this rare opportunity to dig deep and reflect and change and grow. The question is: Will you take the opportunity and will you do the work, the very hard work?

Yesterday I saw you, and you told me you got two sponsors. I’m REALLY proud of you. JoAnn told me she didn’t believe you would get a sponsor. She doesn’t believe you’ll continue to go to outpatient or AA meetings once you are released.

So, you’re coming home tomorrow. JoAnn called to see how I would feel about you coming home. Am I stupid to be optimistic? Am I naive to hope? Everyone tells me how hard it’s going to be. I don’t feel that way, and that makes me nervous.

You’ve been gone six weeks, which at times has felt like forever. Tonight, however, it feels like the blink of an eye, and I’m really nervous.

I must reclaim my own sense of integrity. I won’t abdicate that again.

I so want to believe that this is just over now, but we have a long history of your drinking and lying and manipulation being our “truth.”

How will we forge a new truth? How do I trust that it is real? What will our marriage look like, be like, now?

I so want to believe this can and will work, but I also don’t want to ever feel as stupid as I have felt over these last six weeks.

March 15, 2017, is the beginning of the next phase of our lives. Here’s to whatever is coming next…

This is what came next!

I am in such bliss one month after you came home that I still wake up every morning awash in gratitude for your sobriety. I’ll reiterate what I said to the therapist: If this is our new future, I will bless the six weeks we endured to come out on this end.

This year has been hard, and nothing guarantees the future, but today, I thank God for you, for Quinn, for us and for all the blessings. We are reborn, and I love you Andrew-John!

And we have stayed this way for three+ years now. Tomorrow isn’t guaranteed for anyone, so we take one day at a time, and we continue to celebrate the phenomenal blessings we have been given and the ones we have earned, and we walk our path together.

The main photo is from our last day in Hawaii, the first trip we took where Dr Marry was sober (June 2017). Hawaii is always magical, but every moment of this trip is indelibly etched into my memory. Every glorious second lives right under the surface of my mind because my prodigal husband, this kind, intelligent, witty, highly competent, caring man, had returned from a horrific place I have witnessed from a distance but never been to myself. Somehow, this man found the will to leave there and return to me, and Hawaii lingers as the place where I realized the magic was not the location but the relationship between us.

Next: Three Years, and I’m Still Counting My Blessings 7b (video) 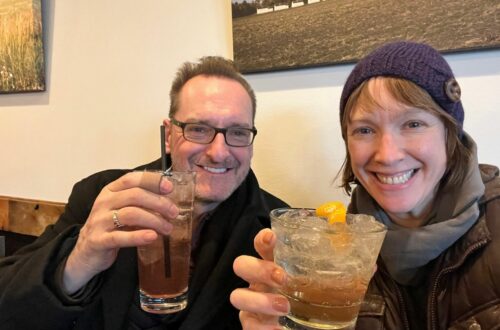 We’re day drinking all week long, and then this popped up. What a difference five years can make.